1) Simple “painting” code - basically, connecting a series of lines together as the user drags their mouse around.

2) An implementation of the built-in Windows API function “ExtFloodFill”, which can fill a contiguous region of an image. (Photoshop users may know this as the “paint bucket” tool.)

To use the program, draw several lines using the left mouse button, then fill contiguous regions (with random colors) via the right button. 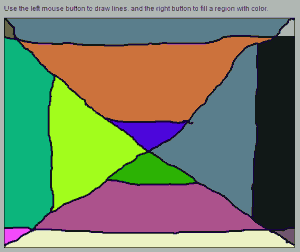 For a much more powerful (and complicated) region-fill implementation, you might review the source code for the fill tool in PhotoDemon, my open-source photo editor.