If you don’t know what “color temperature” is, start here.

While working on a “Color Temperature” tool for PhotoDemon, I spent an evening trying to track down a simple, straightforward algorithm for converting between temperature (in Kelvin) and RGB values. This seemed like an easy algorithm to find, since many photo editors provide tools for correcting an image’s color temperature in post-production, and every modern camera - including smartphones - provides a way to adjust white balance based on the lighting conditions of a shot. 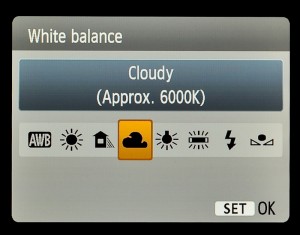 Little did I know, but it’s pretty much impossible to find a reliable temperature to RGB conversion formula. Granted, there are some algorithms out there, but most work by converting temperature to the XYZ color space, to which you could add your own RGB transformation after the fact. Such algorithms seem to be based off AR Robertson’s method, one implementation of which is here, while another is here.

Unfortunately, that approach isn’t really a mathematical formula - it’s just glorified look-up table interpolation. That might be a reasonable solution under certain circumstances, but when you factor in the additional XYZ -> RGB transformation required, it’s just too slow and overwrought for simple real-time color temperature adjustment.

So I wrote my own algorithm, and it works pretty damn well. Here’s how I did it.

Caveats for using this algorithm

Caveat 1: my algorithm provides a high-quality approximation, but it’s not accurate enough for serious scientific use. It’s designed primarily for photo manipulation - so don’t try and use it for astronomy or medical imaging.

Caveat 2: due to its relative simplicity, this algorithm is fast enough to work in real-time on reasonably sized images (I tested it on 12 megapixel shots), but for best results you should apply mathematical optimizations specific to your programming language. I’m presenting it here without math optimizations so as to not over-complicate it.

Caveat 3: this algorithm is only designed to be used between 1000 K and 40000 K, which is a nice spectrum for photography. (Actually, it’s way larger than most photographic situations call for.) While it will work for temperatures outside these ranges, estimation quality will decline.

Special thanks to Mitchell Charity

First off, I owe a big debt of gratitude to the source data I used to generate these algorithms - Mitchell Charity’s raw blackbody datafile at http://www.vendian.org/mncharity/dir3/blackbody/UnstableURLs/bbr_color.html. Charity provides two datasets, and my algorithm uses the CIE 1964 10-degree color matching function. A discussion of the CIE 1931 2-degree CMF with Judd Vos corrections versus the 1964 10-degree set is way beyond the scope of this article, but you can start here for a more comprehensive analysis if you’re so inclined.

The white point occurs at 6500-6600 K, which is perfect for photo manipulation purposes on a modern LCD monitor.

Here’s a more detailed shot of the algorithm in the interesting photographic range, which is 1500 K to 15000 K:

As you can see, banding is minimal - which is a big improvement over the aforementioned look-up table methods. The algorithm also does a great job of preserving the slightly yellow cast leading up to the white point, which is important for imitating daylight in post-production photo manipulation.

How I arrived at this algorithm

My first step in reverse-engineering a reliable formula was to plot Charity’s original blackbody values. You can download my whole worksheet here in LibreOffice / OpenOffice .ods format (430kb).

Here’s how the data looks when plotted: 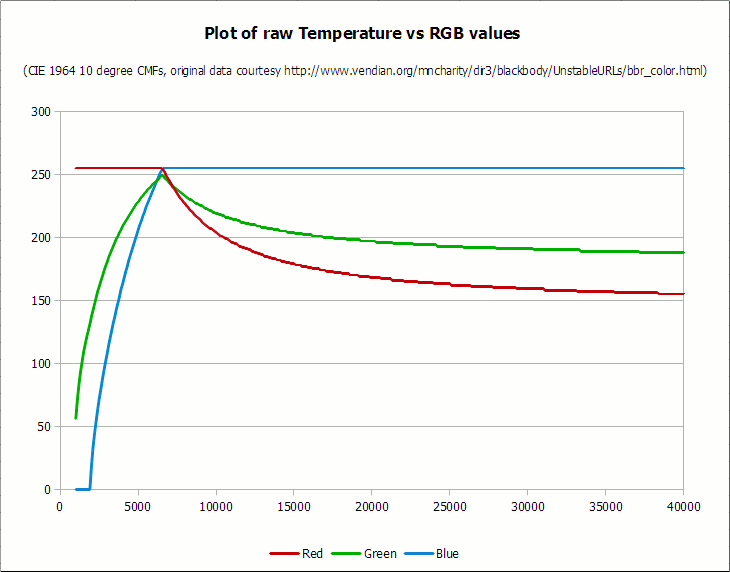 Mitchell Charity’s original Temperature (K) to RGB (sRGB) data, plotted in LibreOffice Calc. Again, these are based off the CIE 1964 10-degree CMFs. The white point, as desired, occurs between 6500 K and 6600 K (the peak on the left-hand side of the chart). (Source: http://www.vendian.org/mncharity/dir3/blackbody/UnstableURLs/bbr_color.html)

From this, it’s easy to note that there are a few floors and ceilings that make our algorithm easier. Specifically:

From here, I separated the data (without the “always 0” and “always 255” segments) into individual color components. In a perfect world, a curve could then be fitted to each set of points, but unfortunately it wasn’t that simple. Because there’s a large disparity between the X and Y values in the plot - the x-values are all over 1000, and they are plotted in 100 point segments, while the y values all fall between 255 and 0 - it was necessary to transpose the x data in order to get a better fit. For optimization purposes, I stuck to first dividing the x value (the temperature) by 100 across each color, followed by an additional subtraction if it led to a significantly better fit. Here are the resultant charts for each curve, along with the best-fit curve and corresponding R-squared value: 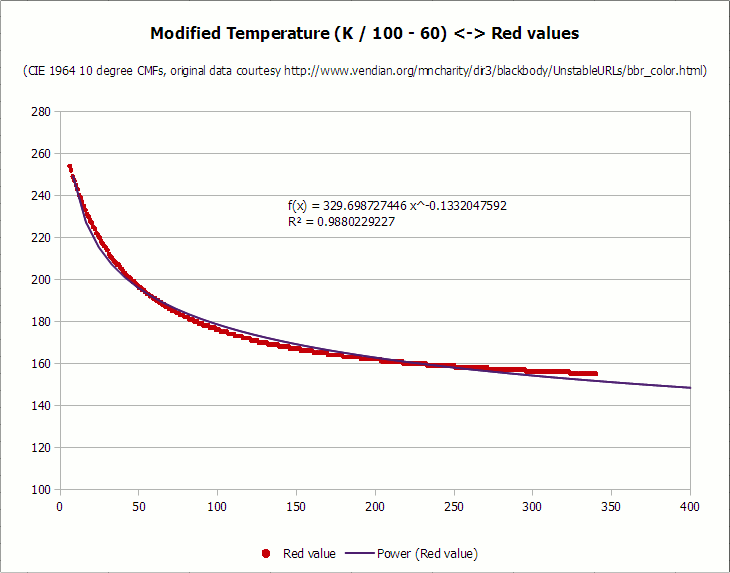 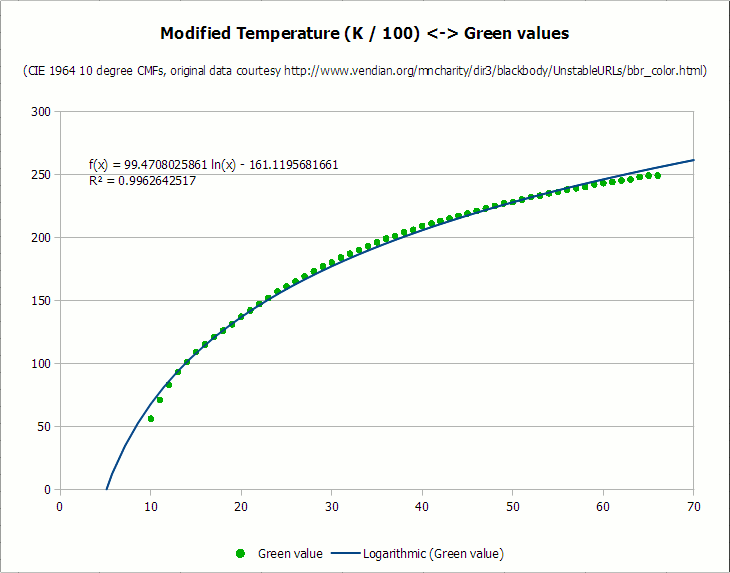 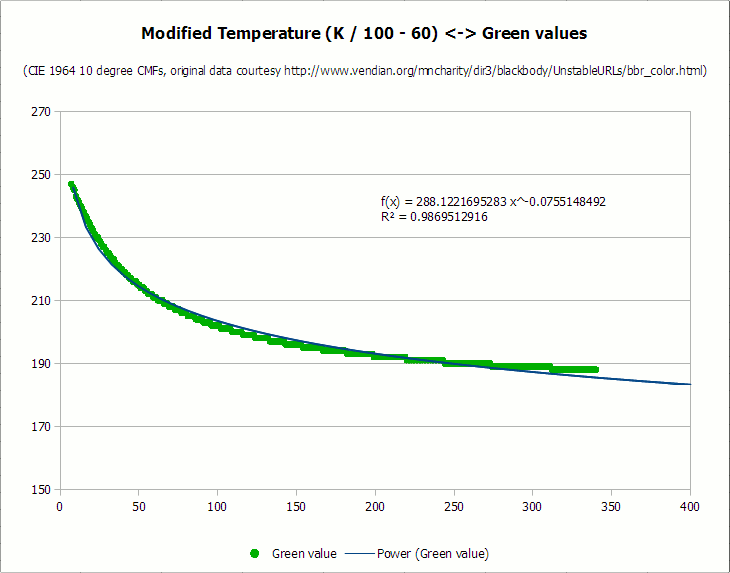 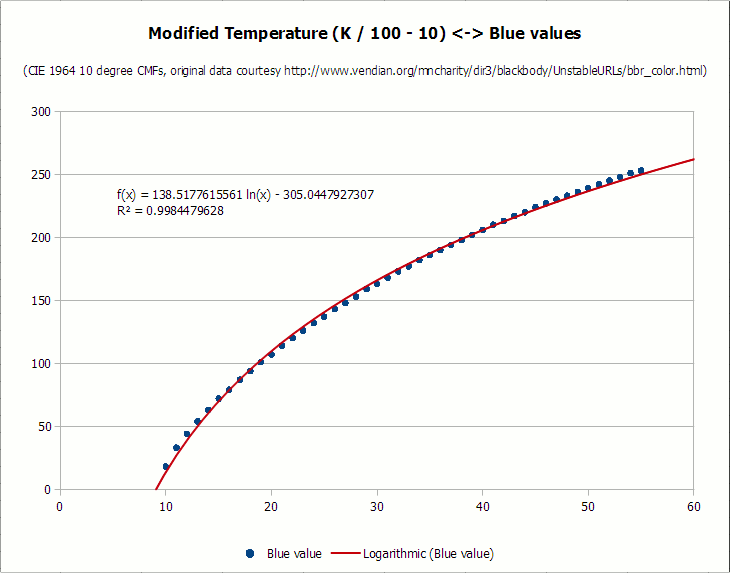 Apologies for the horrifically poor font kerning and hinting in those charts. I love LibreOffice for many things, but its inability to do font aliasing on charts is downright shameful. I also don’t like having to extract charts from screenshots because they don’t have an export option, but that’s a rant best saved for some other day.

As you can see, the curves all fit reasonably well, with R-square values above .987. I could have spent more time really tweaking the curves, but for purposes of photo manipulation these are plenty close enough. No layperson is going to be able to tell that the curves don’t exactly fit raw idealized blackbody observations, right?

Using that data, here’s the algorithm, in all its glory.

In the pseudocode above, note that Ln() means natural logarithm. Note also that you can omit the “If color < 0” checks if you will only ever supply temperatures in the recommended range. (You still need to leave the “If color > 255” checks, though.)

As for actual code, here’s the exact Visual Basic function I’m using in PhotoDemon. It’s not yet optimized (for example, the logarithms would be much faster via look-up table) but at least the code is short and readable:

This function was used to generate the sample output near the start of this article, so I can guarantee that it works.

The actual color temperature tool in PhotoDemon looks like this: 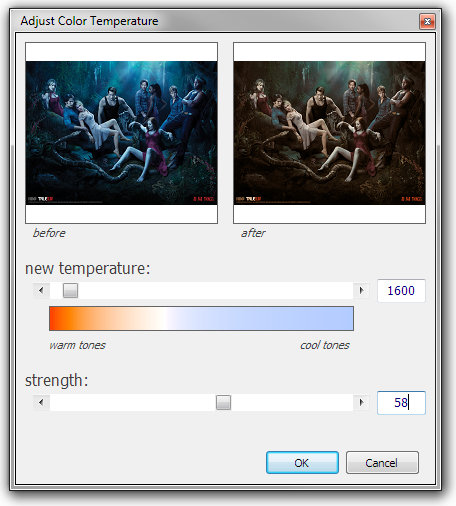 Renaud Bédard has put together a great online demonstration of this algorithm (including a translation to GLSL). Check it out here, and thank you to Renaud for sharing!

Neil B has helpfully provided a better version of the original curve-fitting functions, which results in slightly modified temperature coefficients. His excellent article describes the changes in detail.

David has ported this code to Swift.

Tom Yaxley has ported it to javascript.

Christophe Carpentier has ported it to Java.

Mike D Sutton has ported it to node.js.

m-lima has ported this code to Rust.

petrklus has ported this code to python. (Thank you to nestorst for notifying me!)

teckel12 has ported this code to PHP.

Haroon Atcha has ported this code to R.

Kiryl Ambrazheichyk has ported this code to C#.

Jorge Valle Hurtado has ported this code to C++ for Unreal Engine.