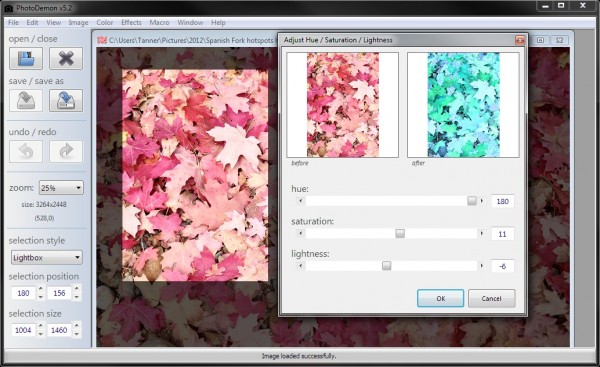 Selections have been one of the top-requested PhotoDemon features since it first released, so I’m glad to finally be able to offer them. A lot of work went into making selections as user-friendly and powerful as possible.

Three render modes are provided. On-canvas resizing and moving are fully supported, as are adjustments by textbox (see screenshot above). Everything in the Color and Filter menus will operate on a selection if available, as well as the Edit -> Copy command.

(Note: as of this v5.2, selections are not yet tied into Undo/Redo, and selections will not be recorded as part of a Macro. These features will be added in the next release.) 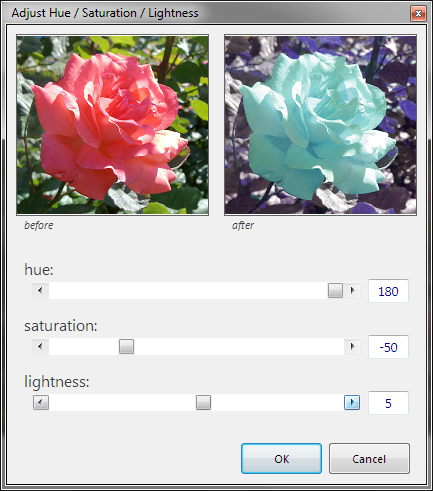 PhotoShop and GIMP users should be happy about this tool. 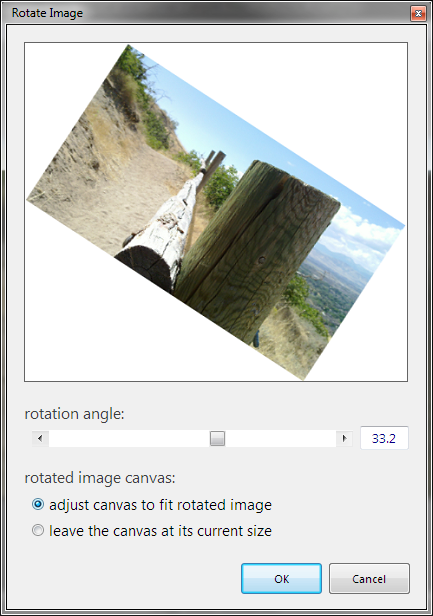 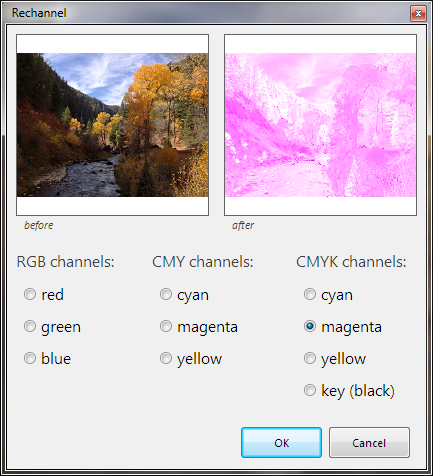 Both CMY and CMYK rechanneling are now available. 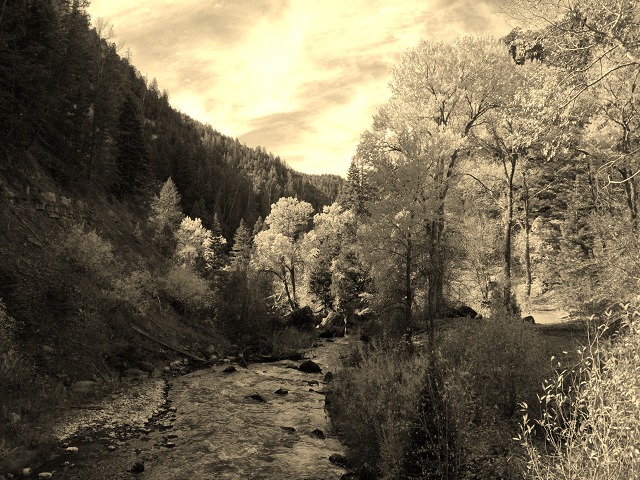 Here’s the sepia version of the photo from the Rechannel screenshot. I still prefer PhotoDemon’s “Antique” filter for most photos, but this sepia formula (from the W3C spec) provides a pleasant, flat alternative. 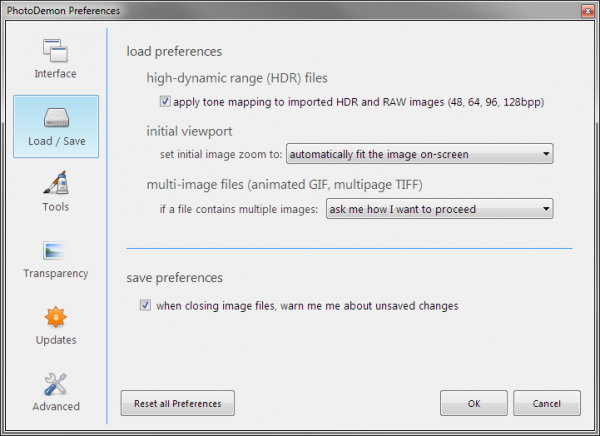 Preferences, preferences, and more preferences. The old Preferences dialog was pretty lame, so it was due for an overhaul. Tons of new settings have been added, and they are now organized by category.

All preferences from v5.0 remain present, and there is now an option to reset all preferences to their default state - so experiment away! 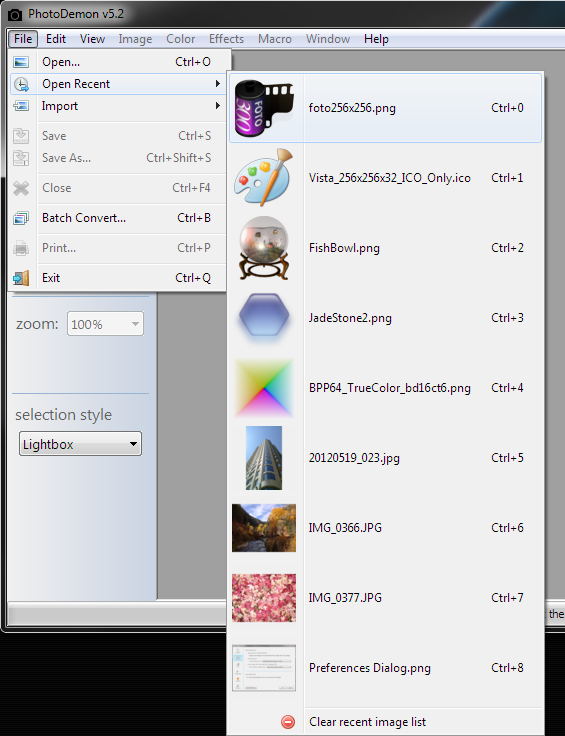 Now that recent file previews are available, I honestly can’t use any software that doesn’t provide the feature. It makes locating the right file significantly easier - especially with digital camera filenames like IMG_0366.jpg.

PhotoDemon will now recognize when you try to load image files that are actually composed of multiple images. You are given the option to import every image, or just the first one (which is what most other software does). The default behavior can be changed in the Edit -> Preferences menu.

It’s hard to overstate how much better transparency support is in v5.2 compared to v5.0. Images with alpha-channels are now rendered as alpha in all viewport, filter, and tool screens. When printing, saving as 24bpp, or copying to the clipboard, transparent images are automatically composited against a white background. As mentioned previously, user preferences have been added for transparency checkerboard color and sizes.

PhotoDemon also allows you to add or remove alpha channels entirely. Here’s an example of an image with an alpha channel, and the associated “Image Mode” setting: 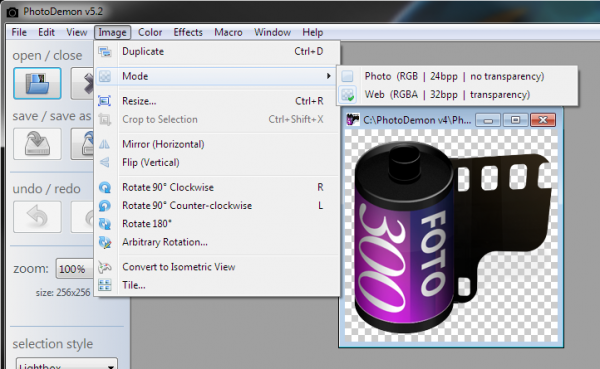 Note how the top-level “Mode” icon has changed to match the current mode - this saves you from having to go to the sub-menu to check. I’m a big fan of small touches like this.

And here it is again, after clicking the “Mode -> Photo (no transparency)” option: 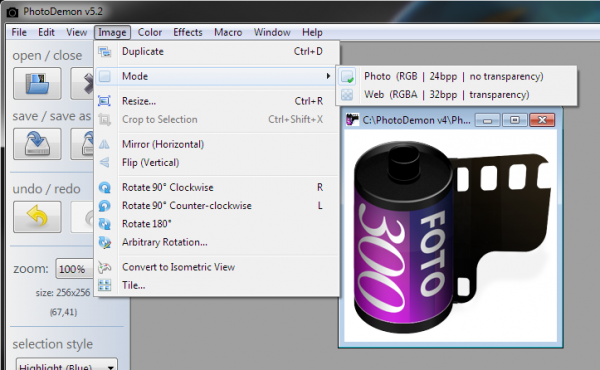 Finally, PhotoDemon now validates all incoming alpha channels. If an image has a blank or irrelevant alpha channel, PhotoDemon will automatically remove it for you. This frees up RAM, improves performance, and leads to a much smaller file size upon saving. (Note: this feature can be disabled from the Edit -> Preferences menu if you want to maintain blank alpha channels for some reason.) 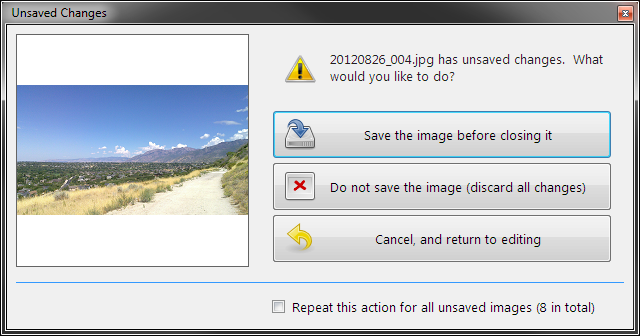 This is the new “unsaved images” prompt in PhotoDemon. A preview is now provided - again, very important for digital photos with obscure names - and the options have been reworked to make them as crystal-clear as possible. Also handy is the “Repeat this action for all unsaved images” option, which will either save or not save all unsaved images per your request. 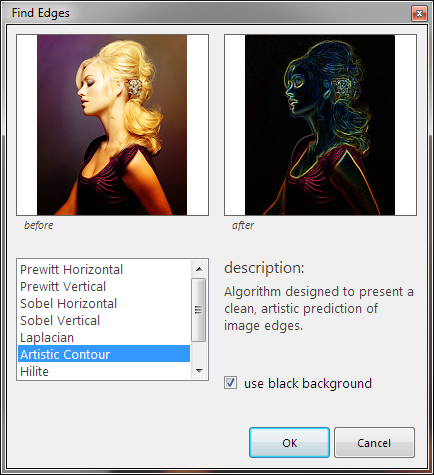 Edge detection now allows for on-black or on-white processing. Generally speaking, on-white is used for artistic purposes, while on-black is used for technical and research ones. (Thanks to Yvonne Strahovski, who appears in the sample image above.)

This Wikipedia article describes thermography in great detail. PhotoDemon’s thermography filter works by correlating luminance with heat, and analyzing the image accordingly. Here’s a sample, using a picture of the lovely Alison Brie, of Mad Men and Community fame: 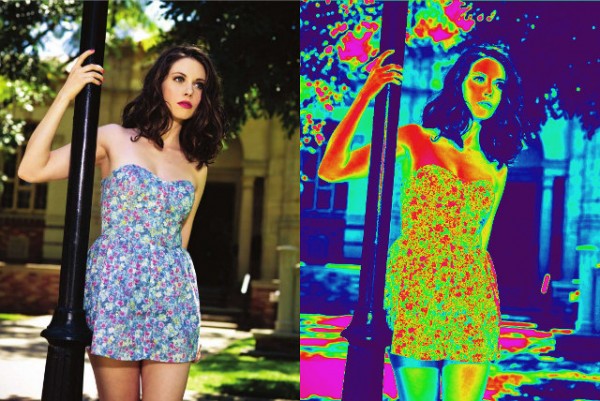 Other New and Improved Features:

Not bad for two months work, eh? I hope you enjoy all the new features in 5.2., and please remember to donate if you find the software useful!